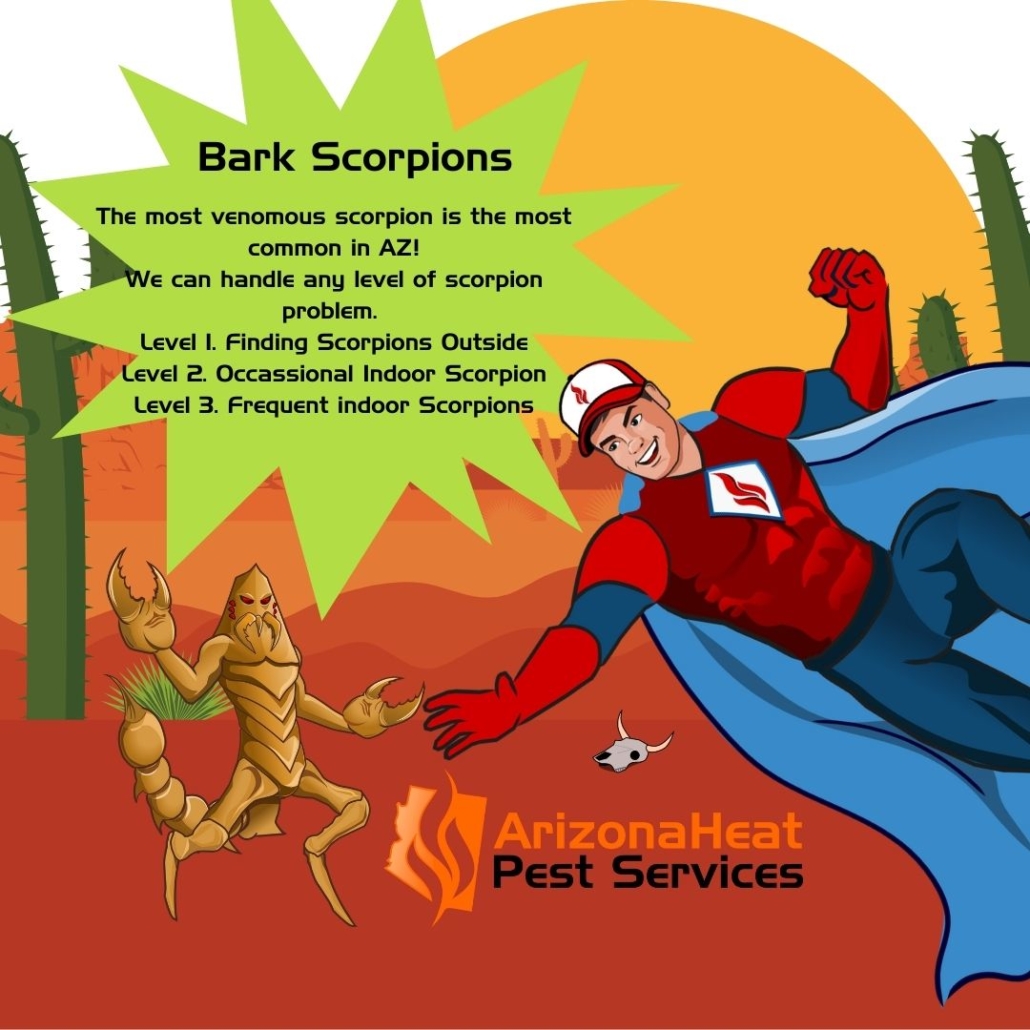 ©2021 ALL RIGHTS RESERVED | CREATED BY STERLING MILLER ON BEHALF OF ADMIN LLC | BEDBUGTREATMENT.COM | REPORT UNAUTHORIZED USE TO [email protected] | PERMISSION GRANTED BY CREATOR IN WRITING

Bark Scorpion Removal and Treatment in Phoenix, Scottsdale, Tucson and Beyond

Bark Scorpions are the most venomous of scorpions, and they are the most common found in Phoenix, Mesa, Scottsdale, Vistancia, Verrado, Norterra, Anthem, and more areas. You are at risk for scorpion invasions if you live on or near mountains, the edges of deserts, or abutting washes. Unfortunately the deserts, mountains, and washes are huge reservoirs or scorpions. Homes nearby these areas will always need scorpion prevention or treatment.

Arizona Heat Pest Services will exterminate any level of scorpion infestation. Level 1: Scorpions found outside. Level 2: Scorpions Occasionally Found Indoors. Level 3: Scorpions Frequently Found Indoors. We offer careful applications of chemistry to indoor and outdoor areas. We offer scorpion black lighting services where we physically remove scorpions from the outside of the property at night. We offer home sealing in some cases to prevent scorpion entry.

We offer careful applications of chemistry to indoor and outdoor areas to eliminate the food sources for the scorpions. Scorpions enjoy eating other insects such as crickets, cockroaches, and other scorpions.

Scorpions themselves are very resistant to many kinds of chemistry applications because of three main factors.

Scorpions glow when you shine a black light on them. We use high powered black lights to locate the scorpions. Once found we gather the scorpions and remove them from the property. When repeated and combined with other methods, physical scorpion removal can produce long lasting results. It is especially satisfying to remove pregnant females or those that have babies on their backs. You see the baby scorpions live on the back of their mother so she can protect them from predators – including other scorpions.

Once all indoor scorpions are exterminated it is best to seal up the openings on the outside of the house to prevent their entry. We seal things like bird blocks, openings where pipes or wires enter a wall, J-trim on the bottom of stucco walls, Vent openings on roofs, vent intakes inside, and more. 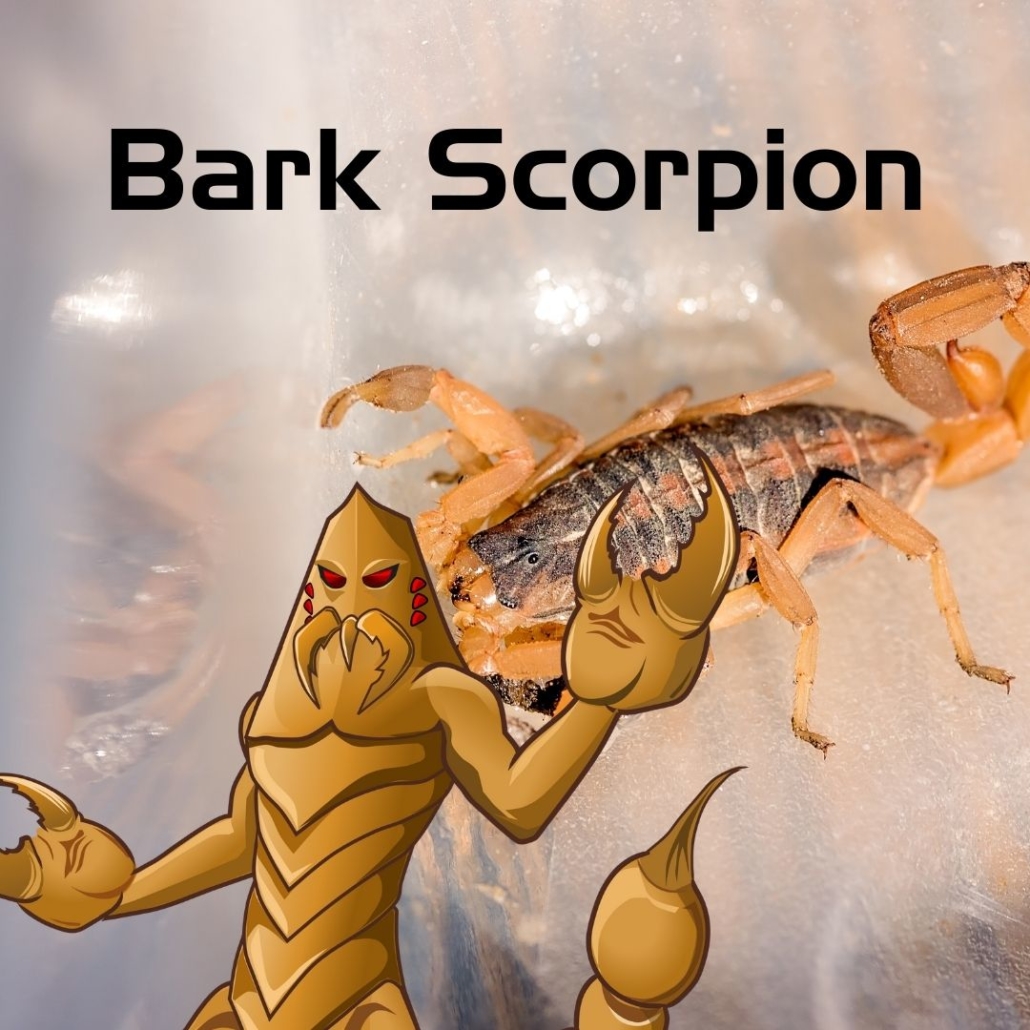 ©2021 ALL RIGHTS RESERVED | CREATED BY STERLING MILLER ON BEHALF OF ADMIN LLC | BEDBUGTREATMENT.COM | REPORT UNAUTHORIZED USE TO [email protected] | PERMISSION GRANTED BY CREATOR IN WRITING

Scorpions are very common. While scorpions sting causing extreme pain, there are few deaths occurring from scorpions in North America. Bark Scorpions are known as the most poisonous scorpion, while the Giant Hairy Scorpion is the largest.

Where to Look for Scorpions:

Scorpions are most active when the weather changes starting in April through November. Scorpion control starts at night, where the UV light will cause the scorpion to glow. However, for every one scorpion you may find, there are about 7 hiding nearby under rocks, in walls, cracks, crevices, and possibly even entering the home as they safely travel along walls such as rodents. Scorpions are typically in search of food, including crickets and roaches. It is best to hire a professional for Scorpion Pest Control Removal.

Exclusion is the best action you can take against scorpions, ensuring there is no way for pests to enter your home. Some people believe that lavender, cinnamon, peppermint and cedar oils with aid in the repellency of the pest, however scorpions typically are in vast numbers and control can prove to be quite difficult without a Professional Exterminator.

Is the process in which a Professional Exterminator will use UV-light after hours to find and determine where the scorpions are gaining entrance, harboring, and treat along their travel paths in order to more effectively control and exterminate the scorpions.